Collaboration Key to Expanding Longleaf Restoration in the Florida Panhandle

Enviva is collaborating with state and federal agencies and non-profit conservation organizations to help restore the critical longleaf pine forest ecosystem around our Cottondale plant in Florida.

Longleaf is a critical forest ecosystem for two reasons. First, it supports a wealth of plant and animal species—dozens of threatened and endangered species depend on the open-canopy pine savanna habitat that well-maintained longleaf ecosystems provide. Well-maintained longleaf stands are characterized by having widely-spaced trees that let enough light reach the ground to support a thriving, ‘understory’ plant community; both the pines and the understory plant community are adapted to and are even maintained by having low-intensity fires every few years. Without frequent fire, longleaf and other kinds of pine savannas get overgrown by brush and small trees that shade out the understory plant community.

Second, longleaf is critical because it’s been largely lost from the landscape, converted mostly to densely-planted pine plantations or farm fields. It was once the predominant forest ecosystem across the Southeastern coastal plain, extending from Southeastern Virginia down to Florida and across to Texas. Where longleaf forests once covered 90 million acres, now they only cover about 4 million acres.

Because of its importance for wildlife diversity as well as its rarity, the longleaf ecosystem is the focus of a concerted restoration effort to restore eight million acres of longleaf in 15 years, involving state and federal agencies, conservation organizations, private landowner organizations, foresters, and some forest product companies.

Enviva has supported longleaf restoration on public lands in an important way in recent years. We provide a market for the trees, tops, and limbs that are removed in two types of restoration operations. Existing longleaf stands often need to be thinned to improve their habitat quality and to get them back in a condition to have safe, low-intensity prescribed fires. And to re-establish longleaf where other types of forest now grow, public land managers sometimes need to remove the existing stands entirely.

To date, we’ve purchased thinnings from longleaf stands at Eglin Air Force Base in Florida and the Croatan National Forest in North Carolina, and we will soon start purchasing thinnings from the Geneva State Forest in Alabama, where almost 900 acres will be thinned over two years to improve the habitat for the threatened gopher tortoise. 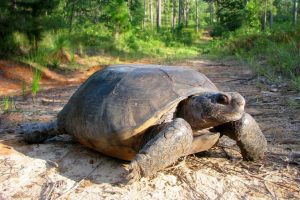 The gopher tortoise, which is threatened in the western part of its range, depends on open-canopy pine savanna habitat that well-maintained longleaf provides. Over the next two years, Enviva will purchase thinned pine and hardwood microchipped from almost 900 acres at the Geneva State Forest in Alabama to improve habitat for the gopher tortoise.

Photo courtesy of Louisiana Department of Wildlife and Fisheries.

We’ve also purchased sand pine and other tree species that don’t provide as much habitat value, which were clear-cut to restore longleaf at Torreya State Park and Falling Waters State Park, both in Florida.

To further support the collaborative restoration effort, over the last year, Enviva has deepened its engagement and investment in longleaf restoration around Cottondale, particularly to support small private landowners improve their forest management and restore longleaf.

We are approaching our collaborations around Cottondale as pilot projects that will allow us to learn how we can best work with and support landowners, public agencies, and nonprofit organizations that are working hard to restore longleaf, so we can implement these best practices at our other pellet plants that are also located in the historic longleaf range.

In 2018, we formed a collaborative project with the American Forest Foundation (AFF) in which we provide financial assistance for AFF to recruit small forest owners to get certified under the Tree Farm program and to restore longleaf. Over the first two years, we will recruit over 500 landowners who will certify over 5,000 acres of forestland and restore over 1,000 acres of longleaf. As part of our project, we are working with The Nature Conservancy (TNC) and the Florida Forest Service, which have prepared a demonstration site to show landowners what well-maintained longleaf forest looks like.

Furthermore, Enviva hired a part-time landowner assistance forester who is helping landowners with important endeavors such as restoring pine (especially longleaf), writing management plans for landowners, helping landowners obtain Tree Farm program certification. The forester will also assist with the process of applying for cost-share funds, and help with the steps required to get longleaf or other kinds of pines – which also provide savanna-type habitat and might be better suited to particular sites –  planted. Our landowner assistance program will focus on upland hardwood tracts that are better suited to pines or longleaf. Historically, the area’s natural, lightning-caused fires would have killed or stunted such upland hardwood tracts on sandy, well-drained soils. To encourage landowners to restore longleaf or other pines, we will also offer bonus payments once pines or longleaf are restored.

Microchipping biomass from certain sites is particularly suited to the restoration of pine and longleaf. At Cottondale, we have two logging contractors or “suppliers” who have micro-chipping machines, which produce fingernail-sized chips from trees and branches. Traditional pulpwood harvests leave abundant slash that needs to be piled with bulldozers and burned, often at considerable expense, and to the detriment of the understory plant community. Because micro-chipping leaves sites free from slash that would otherwise need to be piled and burned, it has become the favored tool among conservation agencies to clear sites of offsite stands in preparation to restore longleaf. Micro chipping leaves sites nearly ready to plant and lets agencies, organizations, and landowners put more of their limited budgets into restoring longleaf.

To increase our collaboration with the conservation community around our micro-chipping and restoration, in June Enviva held a workshop that was attended by a wide range of agencies and organizations.1 The workshop was particularly valuable because it helped to clarify that landowners with upland hardwood tracts that have been micro-chipped in the process of restoring longleaf, will be eligible for state and federal programs to help them offset the costs of restoration. It also provided Enviva foresters with an opportunity to further engage with organizations and agencies that share an interest in restoring longleaf through active forest management on private lands.

Combined with our landowner recruitment effort with AFF, TNC, and NWF, and with the support of the broader conservation and longleaf community, we hope that our landowner assistance program at Cottondale will be a model that we can adapt and apply at our other plants in the longleaf range.