BETHESDA, MD and RENO, NV, December 21, 2020 — Today, Enviva, a leading global energy company specializing in sustainable wood bioenergy, and GoChain, a blockchain company that drives the adoption of impactful technology for the betterment of society and our habitat, announced the initial results of a pilot program designed to enhance the traceability of sustainable biomass.

The pilot program identified a select group of suppliers from Enviva’s wood sourcing regions in the U.S. Southeast to monitor various data elements such as: forest tract locations, load weights, fiber commodity types, and forest types. Leveraging GoChain’s blockchain, Enviva was able to monitor the movement of wood fiber in real-time from select forest tracts at the time of harvest to Enviva’s wood pellet production plants with a unique QR code. The pilot provided real-time geofencing, data analytics, and notification capabilities. In total, more than 1,000 loads of biomass were delivered from the forest to the production plant and recorded “on-chain” during the pilot.

The results of the pilot yielded considerable insights and the pilot has the potential to further augment the accuracy of Enviva’s proprietary Track & Trace® (T&T) system, which provides publicly available data and tracks exactly where the low-value wood used in the production of Enviva biomass comes from. The initial pilot is among the largest-scale, if not the largest-scale, pilot of blockchain technology to date in the global biomass industry. Given the pilot’s success, Enviva anticipates further exploration and piloting of blockchain technology.

Enviva elected to partner with GoChain on the pilot program because of their dedication to sustainability and innovative green technologies. GoChain has developed a unique, highly scalable and secure blockchain solution that is among the greenest and most energy efficient on the market. It uses a ‘Proof of Reputation’ consensus model for processing transactions. GoChain partners with highly reputable institutions such as universities, global enterprises, and NGOs, which function as blockchain signing nodes for the GoChain blockchain protocol. These organizations have set high business standards and believe in the use of technology for the improvement of society and the environment.

Blockchain has emerged as a powerful solution for realizing data-driven insights and granular transparency of global value chains. The use of blockchain technology as a single source of truth not only serves to eliminate unnecessary middlemen and provide transparency in supply chains but also enables the robust real-time audit of secure, time-stamped transactions recorded on an immutable ledger. Blockchain helps to proliferate trust and to verify claims among multiple stakeholders, particularly when relying on legacy, centralized systems with opaque, siloed data. This is especially true when verifying and evaluating claims and certifications within a supply chain. Blockchain is quickly proving to be essential for accelerating certification milestones and ensuring the validity of sustainability governance such as verifying claims of organic and chemical-free products, ethically-sourced seafood or beef, or in the case of Enviva, the sustainability signature of its responsibly sourced wood. 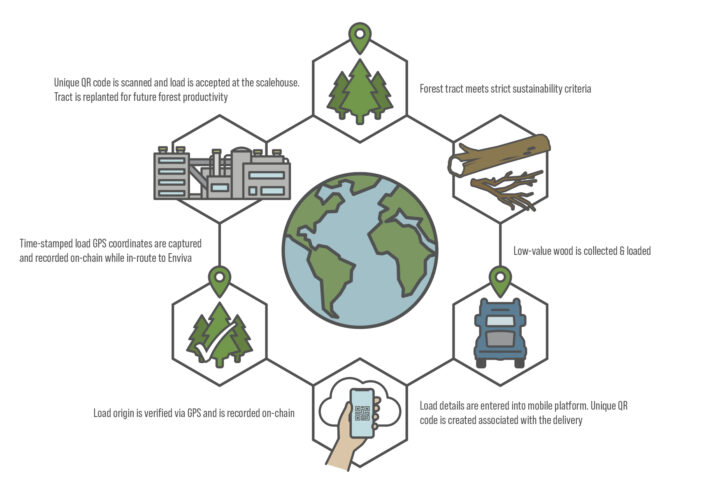 Enviva Holdings, LP is the world’s largest producer of industrial wood pellets, a renewable and sustainable energy source used to generate electricity and heat. Through its subsidiaries, Enviva Holdings, LP owns and operates wood pellet processing plants and deep-water export terminals in the U.S. Southeast. We export our pellets primarily to power plants in the United Kingdom, Europe and Japan that previously were fueled by coal, enabling them to reduce their lifetime carbon footprint by more than 85 percent. We make our pellets using sustainable practices that protect Southern forests and employ about 1,100 people and support many other businesses in the U.S. Southeast. Enviva Holdings, LP conducts its activities primarily through two entities: Enviva Partners, LP, a publicly traded master limited partnership (NYSE: EVA), and Enviva Development Holdings, LLC, a wholly owned private company. To learn more about Enviva Holdings, LP, please visit our website at www.envivabiomass.com and follow us on social media @Enviva.

GoChain believes in driving the adoption of impactful technology for the betterment of society and our habitat. GoChain partners with companies in all industries to quickly launch and manage their own scalable, low-cost blockchain solutions, run distributed applications and to deploy smart contracts. At 1,300 transactions per second, GoChain’s network is the fastest, most reliable, web3 based public and private blockchain protocol. GoChain’s Proof of Reputation (PoR) consensus algorithm relies on a decentralized consortium of Fortune 500 companies, NGOs, and nonprofits to validate transactions. GoChain also supports its designated public cryptocurrency, which has the ticker symbol GO. For more information, visit gochain.io or follow GoChain on LinkedIn, Twitter, and Facebook.