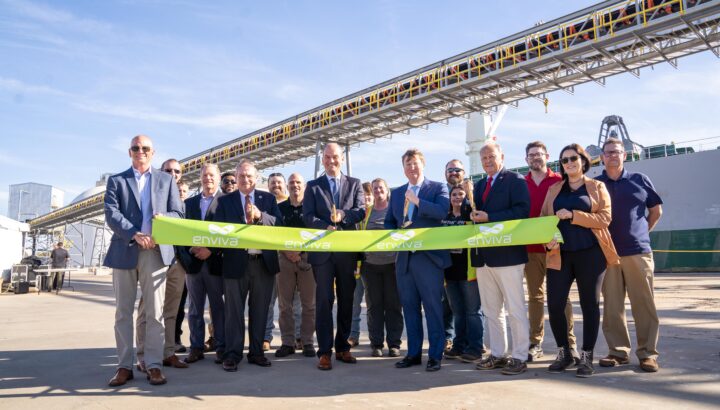 Enviva owns and operates the deep-water marine terminal in the Bayou Casotte Harbor in Jackson County, MS in partnership with Jackson County Port Authority. Since 2019, the Port Authority and Enviva have invested over $90 million to build the terminal at the Port of Pascagoula which can receive product by rail, barge, and truck as well as support Panamax-sized vessels. The facility includes two wood pellet storage domes with a total storage capacity of 90,000 metric tons. Enviva plans to export wood pellets, sustainably sourced from local, well-managed working forests, from the now fully operational Port of Pascagoula terminal to power and utility customers across Asia, Europe, and the Caribbean – with a majority of the terminal’s future shipments slated for Japan.

“The future has never looked brighter for green jobs, green investment, and the global need to implement true climate change solutions into international economies and supply chains,” said Thomas Meth, President and Chief Executive Officer of Enviva. “Supplying the global demand for more renewable, dispatchable, alternative energy sources continues to be made possible by the dedicated men and woman in southern Mississippi that transport Enviva’s product reliably and safely around the world. Now operational, we will be regularly sending off ships filled with our sustainably sourced wood pellets made in Mississippi by Mississippians.”

“This new terminal is a win for Pascagoula, our Gulf Coast, and all of Mississippi,” said Governor Tate Reeves. “Its opening not only further strengthens supply chain infrastructure but expands our economic contributions to the global energy market. Congratulations to Enviva on this exciting launch and I look forward to seeing these Mississippi-made products shared with the world.”

“Enviva has been a great partner in developing and opening the terminal at the Port of Pascagoula, further connecting the Magnolia State to international markets,” said Port Director Mark McAndrews. “Enviva cares about the communities they serve, the people they employ, and the product they produce, which reduces greenhouse gas emissions on a lifecycle basis in homes and industries across the world.”

“Jackson County recognizes Enviva’s confidence in our county and the State of Mississippi with this symbiotic public-private partnership,” said Ken Taylor, Jackson County Board of Supervisors. “The combined investment by Enviva and our Port Authority provides much needed jobs and economic growth for Jackson, Harrison, and George Counties. Let us grow together!”

To date, Enviva’s sustainably sourced woody biomass is predominately used to accelerate the global energy transition and to de-fossilize power and heat generation; however, modern biomass is increasingly being used as a renewable alternative in hard-to-abate sectors like steel, cement, lime, chemicals, and aviation fuel. Looking ahead, Enviva plans to double its production capacity over the next four to five years, from 6.2 million metric tons per year (MTPY) to approximately 13 million MTPY, further solidifying the Port of Pascagoula, MS, as an operational and geographical asset for decades to come.

Enviva Inc. (NYSE: EVA) is the world’s largest producer of industrial wood pellets, a renewable and sustainable energy source produced by aggregating a natural resource, wood fiber, and processing it into a transportable form, wood pellets. Enviva owns and operates ten plants with a combined production capacity of approximately 6.2 million metric tons per year in Virginia, North Carolina, South Carolina, Georgia, Florida, and Mississippi, and is constructing its 11th plant in Epes, Alabama. Enviva is planning to commence construction of its 12th plant, near Bond, Mississippi, in early 2023. Enviva sells most of its wood pellets through long-term, take-or-pay off-take contracts with primarily creditworthy customers in the United Kingdom, the European Union, and Japan, helping to accelerate the energy transition and to decarbonize hard-to-abate sectors like steel, cement, lime, chemicals, and aviation fuels. Enviva exports its wood pellets to global markets through its deep-water marine terminals at the Port of Chesapeake, Virginia, the Port of Wilmington, North Carolina, and the Port of Pascagoula, Mississippi, and from third-party deep-water marine terminals in Savannah, Georgia, Mobile, Alabama, and Panama City, Florida.