BETHESDA, MD, October 6, 2021 — Enviva Partners, LP (NYSE: EVA) (“Enviva”), a global renewable energy company specializing in sustainable wood bioenergy, was honored by Japan’s leading shipbuilder, Imabari Shipbuilding and other relevant stakeholders, in a recently held naming and delivery ceremony for one of their newest cargo vessels in the city of Imabari, the largest maritime city in Japan. The delivered ship was built to transport various dry cargo commodities, including Enviva’s sustainably sourced wood pellets, and will be operated by Daiichi Chuo Kisen Kaisha (Daiichi). Enviva exports its sustainable wood pellets from the U.S. Southeast primarily to the U.K., Europe, the Caribbean and Japan, enabling its customers to reduce their carbon emissions by more than 85% on a lifecycle basis, helping them reach their greenhouse gas emissions reduction targets with renewable energy. 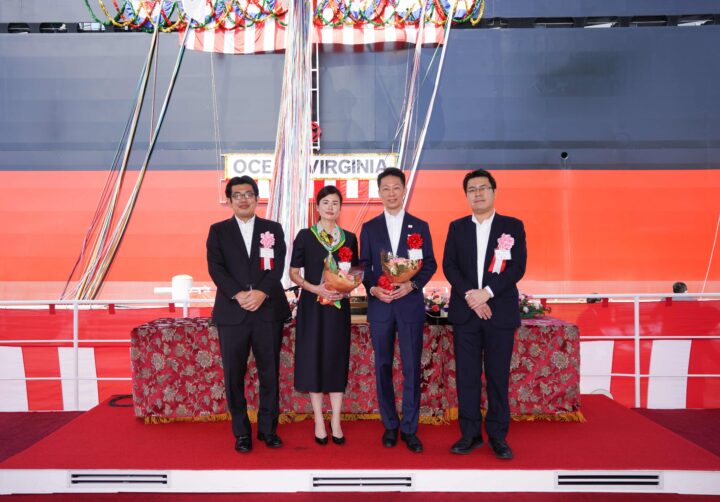 Enviva’s General Manager for Japan, Fred Miyata, and his wife Rena Miyata, were honored by Daiichi as the vessel’s ceremonial godparents, a custom that dates back hundreds of years, in which the couple offer blessings and protection for the ship to ensure its safe return to port. Daiichi also bestowed the privilege of the naming of the vessel to Mr. and Mrs. Miyata, which they called Ocean Virginia, inspired by one of the Southern U.S. states in Enviva’s operational footprint, and from which wood pellets are shipped to its customers via the Chesapeake Port.

“It was a great honor and pleasure for us to name the newest ship, which will deliver sustainable wood pellets to our Japanese customers. Stable and reliable ocean transport is an essential component in building our biomass supply chain. We are truly honored to be able to participate in the industry’s supply chain by collaborating closely with our industrial partners in Japan,” said Fred Miyata.

Daiichi, one of Japan’s most important integrated shipping companies, has played a major role in supporting the development of Japanese industries since its founding over 120 years ago. 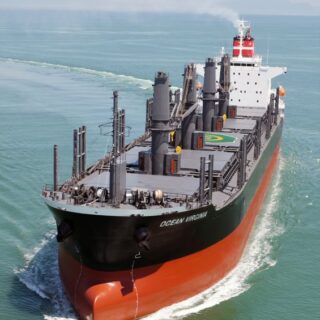 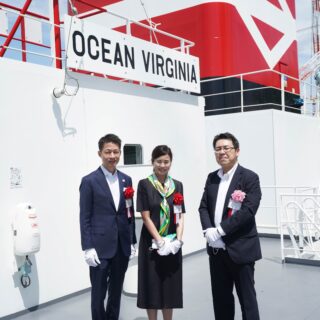 From Left to Right: Mr. and Mrs. Miyata and Daiichi’s Toshihiro Miyazaki

Toshihiro Miyazaki, Director and Executive Officer of Daiichi said, “We are very proud to do our part in contributing towards decarbonization by utilizing our fleet of vessels for the carriage of Enviva’s wood pellets, which now includes our newest arrival, the MV Ocean Virginia.  By developing strong partnerships with good customers such as Enviva, we will be able to help make a difference.”

Enviva’s Contract of Affreightment (COA) with Daiichi enables wood pellet transportation to Japan on a long-term basis. Ocean Virginia measures 180 meters in length, 29.8 meters in width and has a deadweight of almost 38,000 tons. The handysize bulk carrier was built in the Shimanami Shipyard in Imabari, Ehime prefecture in western Japan, where Imabari Shipbuilding’s headquarters is located. This region has a long history of marine transport and shipping industry dating back to the Middle Ages and has endured through various economic cycles while continuing to provide heavy competition for foreign ship builders.

To learn more about the voyage of a Southeastern U.S. wood pellet, take a look at our video, Lifecycle of a wood pellet, here.

Enviva Partners, LP (NYSE: EVA) is a publicly traded master limited partnership that aggregates a natural resource, wood fiber, and processes it into a transportable form, wood pellets. The Partnership sells a significant majority of its wood pellets through long-term, take-or-pay off-take contracts with creditworthy customers in the United Kingdom, Europe, and increasingly in Japan. The Partnership owns and operates ten plants with a combined production capacity of approximately 6.2 million MTPY in Virginia, North Carolina, South Carolina, Georgia, Florida, and Mississippi. In addition, the Partnership exports wood pellets through its marine terminals at the Port of Chesapeake, Virginia and the Port of Wilmington, North Carolina and from third-party marine terminals in Savannah, Georgia, Mobile, Alabama, and Panama City, Florida.

To learn more about Enviva Partners, LP, please visit our website at envivabiomass.com and follow us on social media @Enviva.