BETHESDA, Md., April 21, 2022 – Enviva Inc. (NYSE: EVA), the world’s leading producer of sustainable wood bioenergy, today announced it was the recipient of the “Red Diamond Patriot Award,” the highest tier award the Bertie County Branch of The National Association for the Advancement of Colored People (NAACP) can bestow on an individual or company. Enviva’s Mid-Atlantic Senior Community Relations Manager, Chris Brown, was honored with the Red Diamond Patriot Award at the NAACP’s Annual Freedom Fund Banquet on April 2, 2022 for being an outstanding community partner and advocate for the Bertie County NAACP. 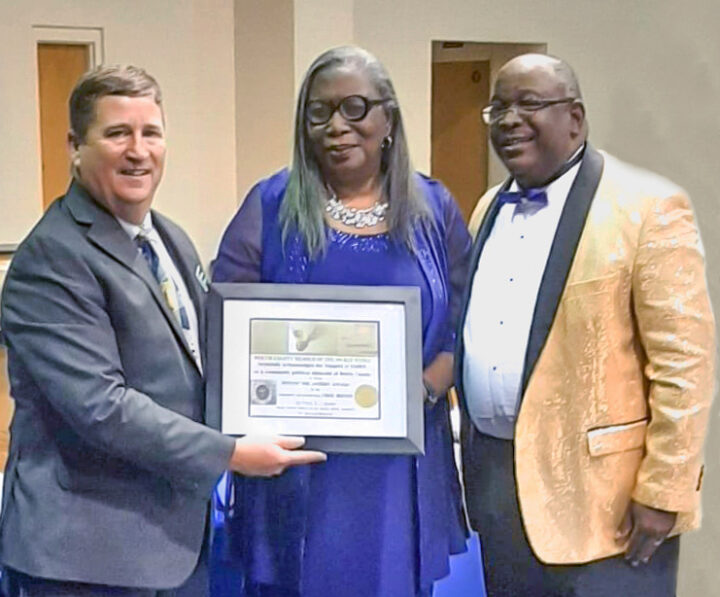 “The Red Diamond Patriot Award is the highest tier award of our local branch,” stated Dr. Kennedy Barber, President of the Bertie County Branch of NAACP. “The recipient of this award is an individual or group who have exhibited exceptional community support above their peers. We, the Bertie County NAACP Branch, are glad that Enviva chose to partner with us in aide to the residents of Cedar Landing who lost everything in the 2020 tornado. As a great Chinese philosopher stated, ‘a journey of a thousand miles begins with one single step.’ Thanks to Chris Brown and Enviva for their willingness to take those steps with us on our long journey ahead.”

Over the last two years, Enviva has been involved with several projects that have benefitted both Bertie County and Northampton County in North Carolina. In August of 2020, a deadly tornado touched down in the area destroying several neighborhoods in its path. Based on requests from local officials and clergy, Enviva quickly stepped in to provide immediate assistance and supplies to the region. Similarly, at the onset of the COVID-19 pandemic, Enviva regularly sponsored and volunteered at the Mobile Pantry to provide food and supplies to families in need throughout Northampton and Bertie Counties.

“Enviva is proud to play an active role in the communities we call home. Through partnerships like the Bertie County Branch of the NAACP we continuously stay engaged to support and serve the communities we work in,” stated Chris Brown. “But even more, I enjoy and appreciate the friendships that develop through the collaboration process on different projects and programs. I truly appreciate Dr. Kennedy Barber and the Bertie County Branch of the NAACP for recognizing Enviva and me with a Red Diamond Patriot Award at their Annual Freedom Fund Banquet. It was a surprise, and a big honor.”